When the founders of Clutchco Pty Ltd approached Japan’s Exedy Corporation in the mid-’90s, Exedy Australia was born and has continued to prosper ever since.

Exedy has a long and successful history in the Australian Automotive Aftermarket which can be tracked all the way back to 1986 when Clutchco Pty Ltd was formed by Barry Davis, Ken Davis, Peter Marsh and John Ede.

These visionaries had all cut their teeth initially at the Repco Clutch Company, which would later become Brake and Clutch Industries and eventually PBR.
Together they shared a vision: to deliver a superior quality clutch, have the largest range and set the benchmark for service.
Typical of most small business start-ups, the original four founders worked around the clock to build the business from scratch. As soon as the phones stopped ringing at the end of the regular day, they swapped their ties for dust coats and packed clutch kits and various components well into the night to be shipped the following morning.
Based on their vision and dedication, Clutchco quickly became a preferred choice for the network of brake and clutch specialists and rebuilders as well as general automotive parts reseller businesses around Australia.

The recipe resonated with the target customer base and the business grew quickly, necessitating several moves to larger warehouses along the way.
Fast forward to 1992 and increasing demand from customers in New South Wales and Queensland justified a separate branch operation and Clutchline Pty Ltd was established in western Sydney. At the same time, Bernie Solomons joined the team and momentum continued to grow.
By 1995 it had become clear that the biggest barrier to expansion was the owners’ ability to fund the growth. At this point, the team engaged with the Exedy Corporation from Japan (then known as Daikin Manufacturing Co Ltd).

Established in 1950 in Osaka Japan, Exedy Corporation began life as a clutch rebuilding operation but fast became a supplier of clutches to OEMs around the world.
Today, the global Exedy Group has 44 operations around the world and employs more than 18,000 people in 25 countries. Exedy’s extensive product line-up includes manual clutches, torque converters, automatic transmission frictions, industrial transmissions and more.
Sharing the same vision for expansion in Australia, New Zealand and the Pacific Islands, Clutchco and Exedy formed an alliance to execute their growth plan.
As a result, Daikin Clutch Australia Pty Ltd started operations in Australia in 1995 and subsequently changed its name to Exedy Australia Pty Ltd in 2000. 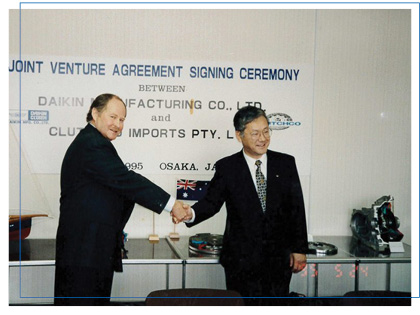 Soon after, a third location was established in Eagle Farm in Queensland and now Exedy has inventory located in six locations around Australia to service the requirements of its customers.
In 2008, Exedy established Exedy New Zealand as an operation dedicated to servicing that market. The New Zealand business is headquartered in Auckland and has a sales and distribution branch in Christchurch. While the original founders have long since retired, many of the original staff from the Clutchco days remain, including sons of founding members, Kabel Davis (Managing Director) and Mark Davis (Product Manager).

Since those early days, Exedy in Australia has expanded its range, distribution network, staff and reputation for quality to entrench itself as the premier distributor of clutch kits to the Australian and Pacific Island markets. The range has long progressed beyond standard OEM Replacement clutch kits to include an extensive range of performance clutches and more.
The company says its growth and success are largely due to the dedicated team of staff and the loyal customers with which they have partnered along the journey.
In parallel to growing its core clutch kit business, Exedy recently expanded its product offering with the introduction of the AISIN brand. The AISIN range includes cooling, drivetrain, clutch kits, hydraulics, lubricants and more.

AISIN is one of the world’s leading OE manufacturers for Japanese, European and American vehicles with over $35 billion in global revenues and the OEM quality range is quickly gathering traction in the Australian aftermarket. Agility is one of Exedy’s values and this allows it to respond quickly to market trends and emerging opportunities. The evidence of which was highlighted in 2017 when Exedy acquired Driveline Auto Parts. The acquisition of the leading supplier of automatic transmission components allowed Exedy to expand its presence in the automatic transmission aftermarket.
When purchased, Driveline Auto Parts had operations in Perth, Adelaide and Sydney and under Exedy’s ownership, its footprint has now expanded to cover Melbourne and Brisbane.
Exedy’s flagship range comprises standard OEM replacement clutch kits suitable for standard passenger, light commercial and Japanese commercial vehicles and it says that all of its clutch kits incorporate superior components to enhance performance.

In addition to its OE Replacement range, Exedy is also well known for designing and manufacturing performance clutches with its extensive performance clutch line-up including Sports Tuff, Safari Tuff and Exedy Racing Clutch. The Sports Tuff Clutch range comprises three separate heavy-duty clutch options that are manufactured to meet the demands of amateur and professional circuit drift and rally drag racing. This range is also ideally suited for applications that operate under load, such as towing a van, boat or for a tradie carrying a ute full of tools.
The Safari Tuff Clutch range is purpose-built for off-road 4WD applications. All Safari Tuff clutches have been extensively tested in notoriously tough 4WD racing conditions across the globe such as the Australian Safari, Malaysia Rainforest Challenge and the Xtreme Winch Challenge.

For drivers who like to push the limits of performance, the Exedy Racing Clutch product features single, twin and triple plate clutches designed for high-end, high horsepower applications across various forms of motorsport from local club meets and drift events all the way to F1 and MotoGP. Exedy reports that Valentino Rossi and Maverick Vinales have enjoyed many wins and championships with the famous Yamaha factory MotoGP team equipped with an Exedy clutch. Exedy also supplies clutches for the heavy commercial industry. Its Truck Tuff range covers American and European drivetrains, while Exedy’s Agri Tuff range comprises OE replacement clutches for Yanmar, Kubota and Iseki as well as well-known brands such as John Deere and Massey Ferguson.

Finally, the AISIN range comprises water pumps, freewheel hubs, clutch hydraulics, lubricants and more. And the Driveline Auto Parts business markets Coolmaster transmission coolers as well as a complete range of components for the repair, servicing and rebuilding of the most popular automatic transmissions in the Australian market.
And in breaking news, Exedy says it is very exciting to announce a partnership with Dodson Motorsport that will see the brand and range of parts become available through Driveline Auto Parts. 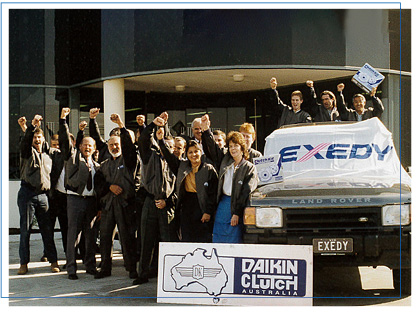 Dodson Motorsport is a ‘Made in NZ’ leading supplier in aftermarket dual-clutch transmission clutches and components for high-end performance vehicles and transmissions. Its range covers a wide variety of performance vehicles including Nissan GT-R, Mitsubishi EVO X, Porsche PDK, VW and Audi DQ250 and DQ500, Audi R8 and the ‘insane’ Lamborghini Huracan.
Exedy products are distributed throughout Australia and New Zealand to clutch and brake specialists, major national wholesalers and prominent reseller groups as well as the major chain store brands while Driveline Auto Parts sells products to automatic transmission repairers and rebuilders and is a Capricorn supplier.

“There is no doubt that Exedy products stand-out, even in this ultra-competitive industry,” Exedy Australia Director and General Manager, Kabel Davis, said.
“Exedy proudly identifies quality and service as our number one priority. This combined with our industry leading range and extensive distribution network ensuring on-time delivery has fortified the business for many decades.

“Add to that an on-going and significant investment in our ever-expanding brand portfolio and Exedy’s ‘keeping things simple and consistent’ mind-set and you’ll quickly realise why we are market leaders.”
Going all the way back to 1995, the vision of the original founders of Clutchco to combine their local expertise, networks and customer-centric focus with the brand strength, manufacturing, development and logistical capabilities of the global Exedy business ultimately cleared the path for Exedy to evolve and grow.
“Exedy is committed to a ‘GLOCAL’ approach,” Kabel said.

“The business combines a GLOBAL perspective for strategy, funding, branding and sourcing, with a LOCAL flavour when it comes to sales, distribution, relationships and range development. This approach delivers Exedy the best of both worlds!”

Exedy explains that market conditions and changes in the industry represent a permanent call to evolve. The Australian car industry has seen a shift away from vehicles equipped with manual transmissions towards automatic transmissions; and further towards vehicles fitted with DCT/DSG transmissions and dampers for EV and HEV vehicles.
“Exedy is navigating those challenges by maintaining a strong focus on its core products and expanding their distribution network,” Kabel said.
“At the same time we are continually evolving our product line-up to service demand for a broader range of vehicles and parts.
“Today Exedy is much more than a single-product company, but we still have a razor-sharp focus on our original products and customers that have been the cornerstone of our success.”